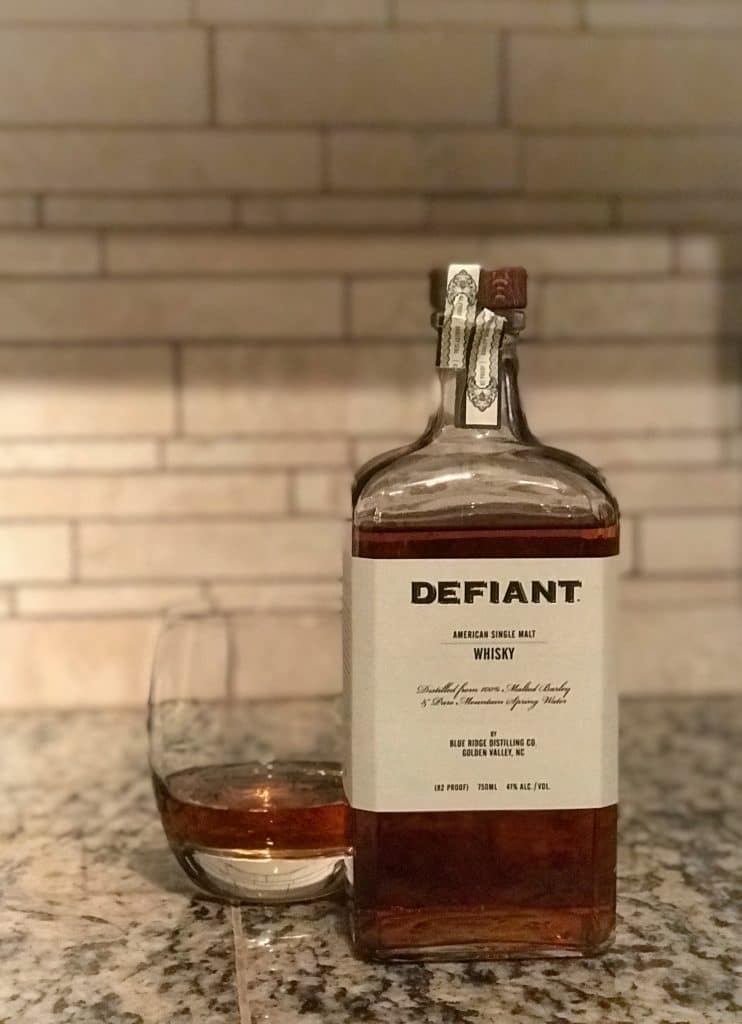 Produced by Blue Ridge Distilling Co, this spirit pulls from traditions of Scottish whisky and marries it with the New World style of American whiskey.

Defiant is a new way of distilling. We’re not bound by barrels or recipes or tradition.”

Since I live in Denver now, I don’t get to taste from the sweet nectar of Southern whiskey (or even many Kentucky Bourbons for that matter). This is my only gripe against Colorado. This bottle was gifted to me by my brother-in-law, someone who appreciates my taste for unique finds.

After a few days spent in the South, I packed this stowaway in my luggage and shipped it across the country with me back to the mile high city. It took about an hour before I popped it open.

As I kept learning more about Defiant American Single Malt Whisky, I found out something very interesting about their aging process. Apparently, they have their own proprietary aging process that does not include aging their whiskey in barrels. Rather than letting their whiskey sit in barrels for years like many other distillers, Defiant uses “cuts” of hand selected American white oak and toast it.

So what the heck does that mean!? Well, most likely it means that they speed the aging process up. If you’re into home distilling, then you might be familiar with this concept too.

I have to admit, I’ve considered taking a bottle of W.L. Weller and aging it in a mini barrel. This process that Blue Ridge Distilling Company has for their Defiant Whisky isn’t a bad idea at all.

Once I realized that it wasn’t a Scotch (seriously, a big surprise), I really started to enjoy this whisky. The simplicity of the ingredients is what came through the most. There’s a rawness to it that I really enjoyed, before reading up about the process and their short list of ingredients. Don’t expect the caramel or vanilla sweetness of a Bourbon. If that’s what you dig most in your whiskey, then you probably won’t fall in love with Defiant.

It’s certainly an interesting American whisky, and one that’s worth adding to your collection.

Go ahead and buy yourself a bottle. I suggest pairing it with a dark chocolate too.

There's barely still time to shop for Father's Day and not end up with a crappy gift. No matter who the dad in … END_OF_DOCUMENT_TOKEN_TO_BE_REPLACED

BIG double IPAs (DIPA) are some of my favorite finds. I love it when a brewery gets a little wild with their … END_OF_DOCUMENT_TOKEN_TO_BE_REPLACED

One of the toughest things about getting out and traveling can be finding the right place to go. I'm going to … END_OF_DOCUMENT_TOKEN_TO_BE_REPLACED